There are many different styles and sizes of narrow boats but they all usually fall into one of three main types.

These types or styles are determined by the shape or features of the back deck or stern. The three main stern types are cruiser, semi-traditional or traditional. There are also a number of other styles, which are not seen as much on the canal network, including a Josher, Tug, wide beam and Dutch Barge.

Narrow boats are all built to the same distinctive design, they are flat-bottomed, long, narrow and made to navigate the canal system. This type of boat was originally built to carry goods on the canals where locks and bridge holes would have a maximum width of at seven feet.

This type of design is still used in the building of the modern day narrow boats which are used for the leisure and holiday hire industry. 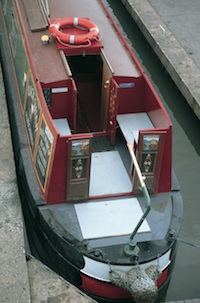 Cruiser Stern - In the early transitional days of the canal network, when business changed from commercial to leisure use, builders and designers responded to the need for more social deck space by developing the cruiser stern. Cruiser sterns are a common sight on the canals and are especially popular with holiday hire fleets. The cruiser stern narrow boat provides a pleasant deck area for seating for all the family.

The engine is accessed through deck boards and makes routine checks and maintenance a far more pleasant experience. External space is gained at the expense of internal cabin area so this it is worth considering this when you are choosing what will be best for you. Sometimes the stern is enclosed by a safety rail which can be surrounded by a canvas hood for your added comfort.

Semi-Traditional Stern - Also known as the semi-trad, this style is a compromise between the traditional stern and cruiser stern style narrow boat. Seen from the side, the canal boat appears to be of the traditional design but in reality it has an extended deck which provides both shelter and storage.

It also give more room to enable one or more of the crew to cruise with the steerer. The area at the rear is normally surrounded by a rail or is sometimes closed in so this type of stern is ideal if you have children in your crew. Access to the engine is generally good via the deck boards

Traditional Stern - The traditional stern style canal boats are a reflection of the old working narrowboats that were used commercially to carry cargo. These narrow boats were built to carry as much as was possible and therefore the living accommodation was secondary. 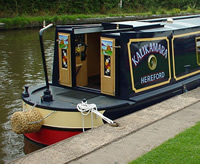 On this type of narrow boat the working boatman and his family would live in a very small cabin area. All that was needed to steer the narrow boat was a small rear deck which allowed the rear cabin space to be maximised and this also applies to the modern canal boats of today.

The engines and drive gear are either in a separate engine room or cleverly concealed beneath the deck. Because the traditional stern is not really large enough for anyone other than the steerer to stand on it could be said that it is not the most sociable of designs.

Which type of stern you choose is up to you but well worth considering when booking your narrow boating holiday.

*For complete novices and for 'land lubbers' the stern is situated at the back or aft of the canal boat and is where the tiller is located. The bow is at the front.

Back to the Articles Menu